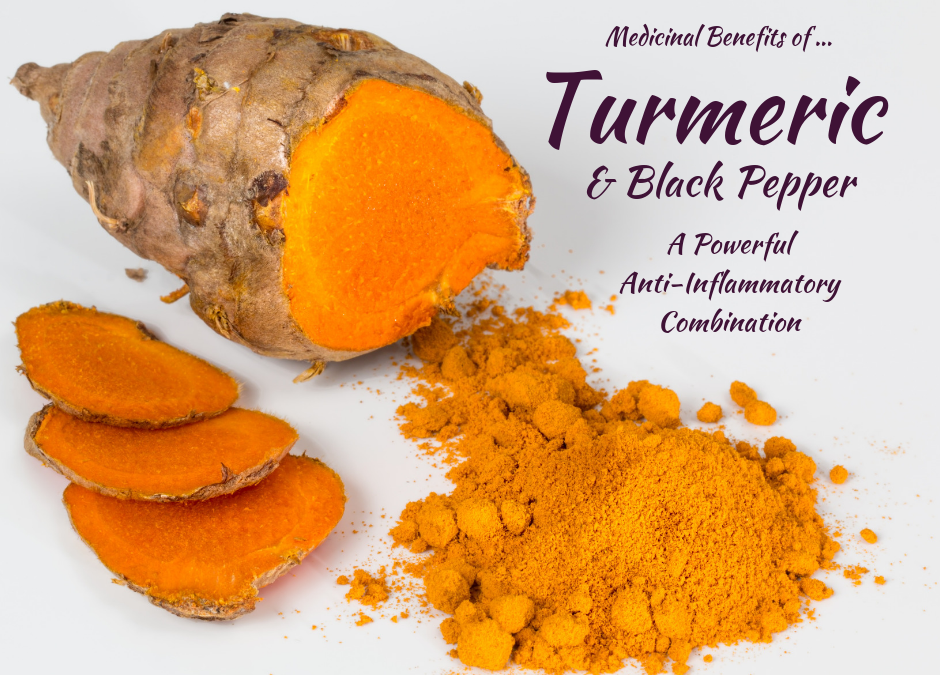 Turmeric root is a spice that has been used since ancient times in India for both its culinary and medicinal qualities. It originates from the Curcuma plant. In the West, we most likely know it for its spiciness and use in dishes such as curry & curry powder. Recently however, the Western world has begun to take notice the health benefits of turmeric, which have been known for thousands of years in the Eastern Cultures.

Curcumin, the oil derived from turmeric, has been studied in numerous experiments, and has been shown to be equally as effective as typical anti-inflammatory drugs. The key difference is there are no side effects associated with curcumin oil. This is good news for those who suffer from joint conditions, such as arthritis, where inflammation plays a key role in exacerbating chronic pain.

Piperin, found in black pepper, taken with curcumin, found in tumeric has been found to significantly increase the absorption and effectiveness of curcumin. Taken orally by mouth, turmeric isn’t absorbed into the bloodstream very well. If you consume a little black pepper along with the turmeric, it can increase the absorption rate of the curcumin up to as much as 2,000 percent! WOW!

Turmeric can provide many health benefits, some of which are outlined below.

Turmeric has long been used for its anti-inflammatory properties in Eastern cultures; this helps the body to fight infection and repair itself. It is the oil that the turmeric provides that has the scientifically proven anti-inflammatory capabilities.

Inflammatory bowel diseases such as Crohn’s disease are common disorders that affect many people throughout the world and can be quite debilitating. Studies have investigated the effect of turmeric in mice who have such diseases.

Although the researchers are not entirely sure how it works, curcumin oil improved cell functions and reduced the symptoms. Certain symptoms such as mucosal ulceration were almost completely removed.

Turmeric has also been shown to help with the common conditions of indigestion and heartburn. These are frequently experienced by individuals and can be incredibly frustrating and uncomfortable.
Turmeric stimulates the gallbladder and increases bile production; in Germany, turmeric is prescribed for such problems.

Studies have shown that there is a protective effect of turmeric on the heart. Initial research shows that turmeric can help to reduce the build-up of plaque in the heart, a key contributor to heart attacks. Turmeric may help to prevent oxidized cholesterol, which is what damages blood vessels. Damaged blood vessels are a critical factor in many heart diseases, such as health attacks, strokes, and atherosclerosis.

Research has shown that turmeric can actually delay the onset of diabetes. In a study, participants were tracked over a period of time and given either a placebo or curcumin tablets.
At the end of the study, not one participant who had taken the curcumin had developed diabetes. It is argued this finding is due to the anti-inflammatory and antioxidant properties.

High cholesterol is a common disorder and has been linked to many different, some serious, disorders.
Initial research shows that the oil in turmeric, curcumin oil, can help to lower cholesterol levels. It works on the liver and encourages it to produce more receptors that produce lower cholesterol.

• Turmeric in dried spice form can add loads of flavor to curries, stews, stir-fries and roasted meat and chicken.
• Fresh turmeric is a root that looks much like fresh ginger. It can be juiced along with other fruits and vegetables. It can be added to smoothies and surprisingly doesn’t change the taste a lot. Be sure to add a bit of black pepper as well to enhance the absorption rate.
• It makes a great addition to a chicken marinade adding a bright orange color to the mix; it is a key ingredient in Middle Eastern chicken kabobs.
• Use it to substitute saffron or mustard as it provides an equal yellow hue
• Jazz up white rice, by squeezing fresh turmeric through a garlic press and adding it to the rice, offers lots of flavor, and a golden color.
• Use fresh chopped or grated turmeric in coleslaw to add color, flavor, and key nutrients.

Everyone should seek medical advice before adding extra turmeric to their diet and sometimes it may actually have negative effects for some people, for example, its ability to slow blood clotting could be dangerous for anyone taking anticoagulant medication. If in doubt, speak to your medical professional.