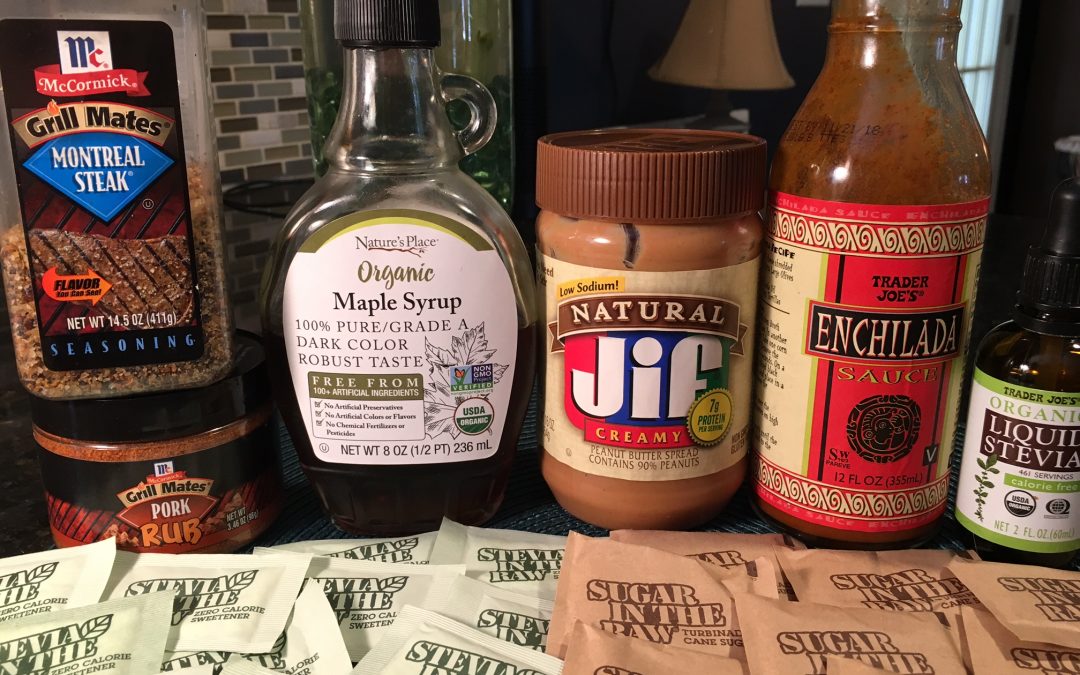 Sneaky Sugar In My Pantry

During a 90 Day Challenge I hosted, I went through the various phases myself. Here’s what I found in my own kitchen during the preparation phase.  The challenge eliminated all sugar and sugar substitutes for at least 30 days. For 30 days, other foods that are often the source of unidentified food sensitivities and foods that do not promote health were also  eliminated. These included, in addition to sweeteners, grains, dairy products, soy products, and legumes.

You may already be asking, “Well, what is left?” Plenty! Plenty of health promoting and delicious food. I promise. We’ll get to that later.

But first, here’s a run-down of what I found in my pantry, and all the sneaky places I found sugar and it’s derivatives.

I found a lot of Sneaky Sugar 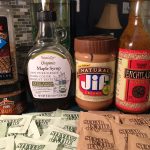 As part of the 90 Day Challenge, I’ve committed to completely eliminating sugar from my diet for at least the first 30 days. Going through my pantry and refrigerator was a great exercise for me. Even though I make pretty healthy choices, I had forgotten how much sugar is in EVERYTHING! I rarely cook or eat sweets. I avoid processed and junk foods. In general I eat pretty “clean” as I call it. I avoid artificial additives and preservatives, and I buy organic when I can. Still, as I was preparing my kitchen pantry and refrigerator for this challenge, I was surprised at what foods had to go; in particular things that didn’t make the cut because of added sugar.

Did you know: The USDA subsidizes crops with our most over-consumed and unhealthy foods? …mainly the ones I’ll be cutting out for the next 30 days. Among the top USDA subsidized crops: wheat, corn, soybeans, rice, peanuts, milk & corn fed beef.  Funny how the healthier crops are not getting government subsidies. Makes me think, The government helped make (the) US fat.

Yep, we won’t be consuming any of those either during the first 30 days of this program.  My advice is that, “Real food is always better than fake food!” Artificial sweeteners are not good for you. These sweeteners are made of chemicals that are toxic to your body, and in spite of the fact they may have zero calories they can still affect your hormones and insulin response. Some of these artificial sweeteners have been linked to cancer and tumors as well as other problems. Stevia is the only natural zero calorie sweetener that is acceptable, and it leaves an after taste that I don’t like. If you really need a sweetener you are better off to add a teaspoon of sugar, honey or other natural sugar to your food (after 30 days) and you will find a list of natural sweeteners at the end of this post. Update: Monk Fruit is another popular, natural, zero calorie sweetener. However, most of the time it also has the ingredient, erythritol, a sugar alcohol.

Gradually, as your eating habits improve and your blood sugar stabilizes you will find you can enjoy your foods without added sweeteners. You will begin to taste the full flavors and sweetness of your foods without the added sugars.

What I found in my Kitchen

Here are some of my healthy foods that didn’t make the cut. I shop at Trader Joe’s a lot, and I found a lot of my favorite items contained sugar so I won’t be eating them for a while. I still love Trader Joe’s, and it was where I went to stock up on a bunch of pantry and refrigerator items that I will be using during my challenge.

So what didn’t make the cut? … and what did? 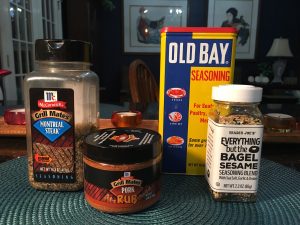 I think this surprised me the most! Spices from my spice cabinet! McCormick Grill Mates, Pork Rub and Montreal Steak Seasoning both contain sugar … so they got put on the back shelf. However, McCormick’s Old Bay Seasoning made the cut – so I’m keeping that one, and very happy about that since it is the number one favorite seafood seasoning around here in Coastal Virginia! Trader Joe’s Everything but the Bagel Sesame Seasoning Blend made the cut, too. I like to use that on grilled tuna and it may work for steak as well. 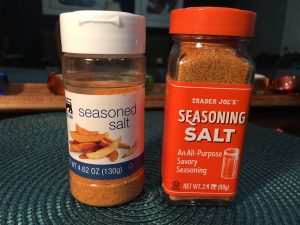 I expected that the store brand of seasoning salt might contain MSG, which would disqualify it. It didn’t have MSG, but sugar is the second ingredient listed on the label. Trader Joe’s Seasoning Salt on the right made the cut; it contained nothing but the spices in the ingredients.

Did not Make the Cut: My Organic Ketchup and Mustard 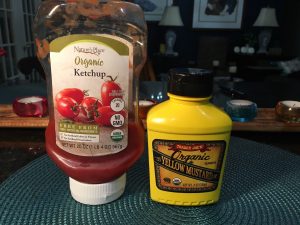 Organic Ketchup and Organic Mustard: both of them contained sugar, so they got moved to the bottom shelf. I haven’t found any ketchup without sugar. However, MOST yellow mustard does NOT contain sugar or any other additives, so you can go purchase Heinz, French’s, or most plain old store variety will do—just check the label. We will all be label reading guru’s by the time we are finished!

Did not Make the Cut: MOST of my Prepared Sauces & Dressings 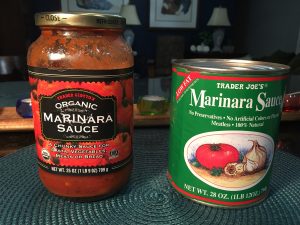 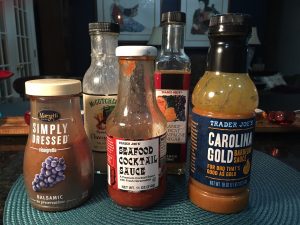 None of my salad dressings, my Seafood Cocktail Sauce, Barbecue Sauces or even the Orange Muscat Champagne Vinegar made the cut. Most all of them contained sugar.  Other ingredients that disqualified them were Soybean or Canola Oil, soy or milk by-products, and other additives. The Simply Dressed Balsamic (photo to the right or below) ALMOST made it!

Did not make the cut: Rice Milk & Almond Milk 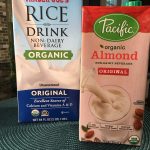 I was surprised to find that the Almond Drink, even the original unflavored version, contained sugar. The rice drink, obviously is derived from a grain and it had other ingredients that may have disqualified it as well. Hmmmm … these may just have been a waste of money and calories that could have been better spent on something that was more nutritious and tastes better!

Did not Make the Cut: Soy Sauce 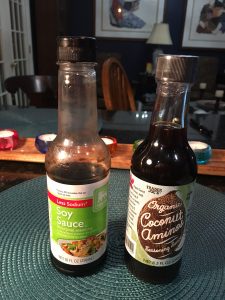 The Lower Sodium Soy Sauce – well no soy, and soy sauce contains gluten, but there is an alternative. See Trader Joe’s Organic Coconut Aminos on the right? That one made the cut and is now my new condiment.

Did not Make the Cut: Meal Replacement Shakes

JJ Virgin’s Paleo Friendly Shake almost made the cut. It’s protein is derived from Beef Protein Peptides instead of Whey. The only thing that disqualified the JJ Virgin shake is the Stevia Leaf Extract for sweetener. It isn’t an artificial sweetener, but it does count as a sugar. I’ll probably be adding this back into my pantry as a back up meal replacement after the first 30 days. For now, however, all my meal replacement shakes and powders go on the pantry with the grains, legumes and other items I won’t be eating for the next 30 days. Don’t worry, I’ve found some WHOLE FOOD bars and other quick items you can grab and go that will make the cut. More about them later …

I’m out of my liquid vitamin supplement, so this morning I grabbed an Emergen-C and thought to read the ingredients before I added it to my water. Guess what I found? The first two things listed in Other Ingredients: Fructose, Maltodextrin … 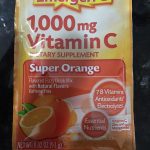 Become a Label Reading Guru and a Sugar Sleuth!

What is the moral here? Read the labels! Read all of the labels and don’t take anything for granted. I didn’t have a bunch of sweets, cereals, brownie mixes or any cookies or cakes in my kitchen. Yet, I still found plenty of Sneaky Sugars and other additives in the “healthy” foods stocked in my pantry. At least most of these items listed “sugar” right there in it’s natural state, but in many processed foods and nutrition bars hide sugars by calling them by other names.

Here’s what to look for: 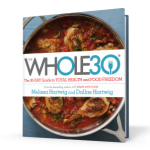 My resource for this list of sugars came from http://Whole30.com; I highly recommend the book by the same name, Whole30 by Melissa Hartwig