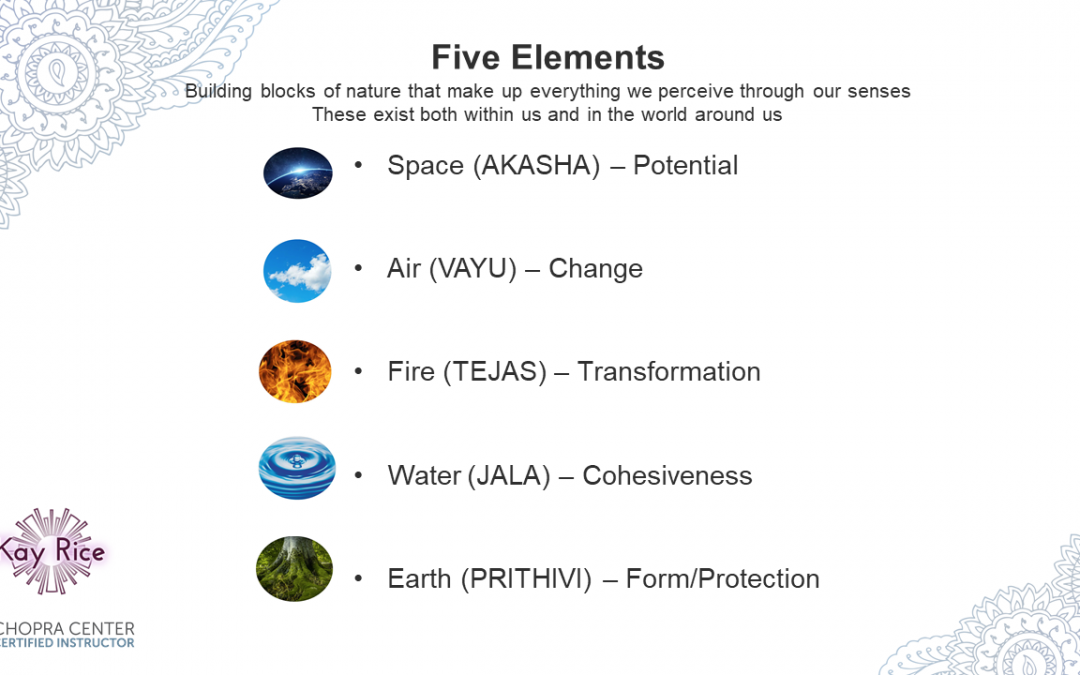 According the the ancient teachings of Ayurveda, the five great elements of space, air, fire, water & earth organize themselves into three essential principles: Movement, Metabolism & Structure. These principles are known as the doshas in Ayurveda.  The Sandskrit names for the three doshas are Vata, Pitta and Kapha. These three dosas are the components of life and all living systems. Explaining the world we live in through these elements is common to virtually all the ancient wisdom teachings of the world from the Native American Indians, to the Indigenous people in South America, to Ancient Chinese Medicine, to India where Ayurveda originated.

To understand the dosha principles, lets first explore the five great elements that make up nature.

According to Vedic Science, or Ayurveda, conscious manifests the world through five codes of intelligence called the five  Great Elements (Sanskrit: Mahabhutas).  These great elements are Space, Air, Fire, Water & Earth. These elements are the building blocks of nature.  Using the elements to explain our world is consistent with other ancient wisdom traditions of the world.  Since our bodies are part of the world, they are composed of these five elements. Fundamental to the timeless healing system of Ayurveda is the expression: "As is the human body, so is the cosmic body. As is the human mind, so is the cosmic mind." This phrase embodies the understanding that the human mind-body is not separate from nature. The Infinite Intelligence that governs the growth of a single cell into the 50 trillion cells that are currently functioning as your mind-body is the same as the Cosmic Intelligence that orchestrates the changing of the seasons, the migration of animals and the movement of the stars. This is why understanding the fundamental building blocks of nature allows us to better understand ourselves.

The space element represents the open expanse in which everything is contained. In the universe, space expresses itself as the vast emptiness that underlies the physical world. Within our bodies, space can be recognized as the gaps between and within cells through which information flows.

The air element is the animating force of life; it is present in everything that moves. Externally this force is represented as the wind; internally it is the movement of breath, circulation and nerve impulses.

The fire element is present in everything that generates heat, light or transformation. Fire expresses itself in the outer world as the sun and internatlly as our digestive and cognitive processes.

The water element connects and nourishes the physical substance of our bodies. Our bodies are comprised of roughly 70% water, as is the planet itself. Internally, our organs and systems are nourished by the river of our plasma, our joints are lubricated by synovial fluid and our central nervous system is protected by creebrospynal fluid.

The earth element expresses itself as solidarity, mass and form. It is reflected in nature as planets, mountains, rocks and all solid structures. Internally, the earth element gives rise to our bones, muscles, tendons and cartilage. How is Your Mind-Body, or Dosha, Type Determined?

Our psycho-physiological, or mind-body, type is determined at conception by a number of factors, to include our parents' doshas, time of day of conception, where they were located and even what they may have eaten.

We all have all five of the elements & all three doshas present in our constitution. It is most common for an individual to have one or two of the doshas predominant. Even though we come into the world with a dosha type that was determined at conception, called our Prakruti, our experiences and choices influence our current dosha type. If one of the doshas is out of balance, it means we have "too much" of that principle active, and there are things we can do to bring ourselves back into balance. Our current state of balance is refered to in Sandscrit as our Vikruti. Mantaining balance is essential to health.